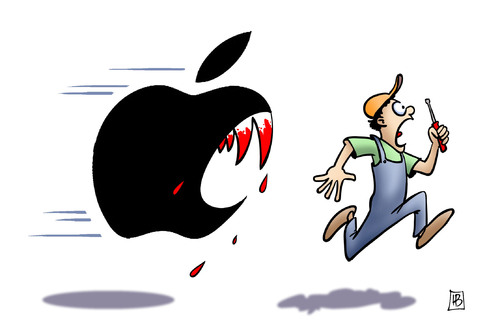 In the 1920s, the manufacturers of light bulbs agreed that their products should no longer have a life expectancy of 2,500 hours, but only 1,000. However, this was done more to the benefit than to the detriment of their customers. After all, the most expensive part of using incandescent lamps is the electricity consumption. And that was lower for the bulbs with only 1,000 hours of life expectancy than for those that burned for 2,500 hours. The bottom line is that the consumer benefited from this cartel agreement.

With modern electronic devices, which are designed to be repair-hostile, the cost-benefit calculation looks different. Here, the manufacturers profit.

Wear parts of computers, laptops, tablets and smartphones are power supplies and batteries. Everything else lasts forever. From time to time, however, you should thoroughly clean the interior of devices with built-in coolers, because dirt accumulates there and dust mites have wild parties.

Companies such as Microsoft and Apple ensure that their products do not become obsolete via hardware with built-in predetermined breaking points, but via the operating system. Apple no longer provides security updates after about six years. Windows 10 from Microsoft will run until 14 October 2025 – after that, Windows on devices with older processors is over. Expensive new software is conveniently linked on Microsoft’s website.

The free, secure operating system Linux can breathe new life into older computers. Not always, but very often, repairing electronic devices is cheaper than buying new ones. We will be happy to advise you on this – free of charge!