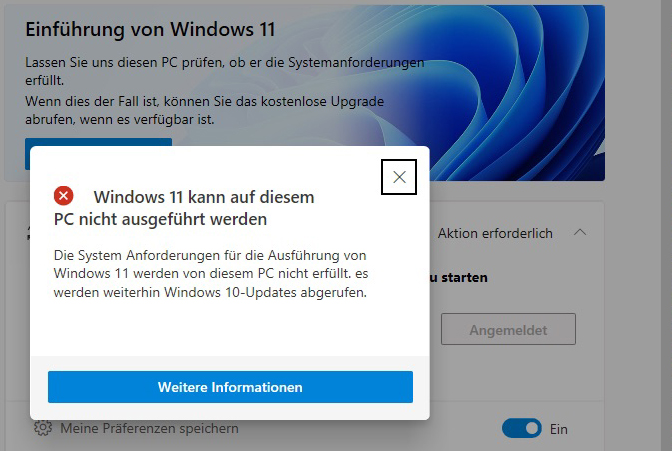 When buying a new computer or laptop, you should make sure that Windows 11 is preinstalled on the device and not Windows 10, because Microsoft guarantees security updates for Windows 10 only until October 2025. After that, it will be problematic to go online with Windows 10 devices. And who wants to spend money on a device that cannot be used without restrictions for more than three and a half years?

A salesperson’s general promise that a later upgrade to Windows 11 is possible can be deceptive. If the computer or laptop is capable of running Windows 11, why doesn’t the dealer upgrade it himself before the sale?

However, even with devices that initially run Windows 11, pitfalls lurk. Because the system requirements can be circumvented when installing Windows 11. In this case, Windows 11 runs initially, but no updates can be loaded later.

Small utilities such as ReadySunValley make it possible to change the registry of your device, which then pretends to fulfil all hardware requirements in the Windows 11 installation process. The tool can be downloaded here free of charge:

ReadySunValley is relatively harmless and only circumvents some soft criteria for Windows 11 installation.

Starting with build 22000.588, Windows 11 will in future warn users of computers and laptops running Windows 11 even though the hardware is not compatible. Testers describe this notice as a “watermark”.

The “watermark” complicates the handiwork of hardware providers who seem to be unbeatable in terms of price because they install outdated components in their devices with which the assembled computer will only be of limited use beyond October 2025.